The Sharp Edge of Love – 50 Shades of Real! Full synopsis and HOT Reviews

Unlike 50 Shades of Grey, The Sharp Edge of Love renders true accounts of four unique, amazing, passionate women who cross the threshold of their darkest desires into the realms of 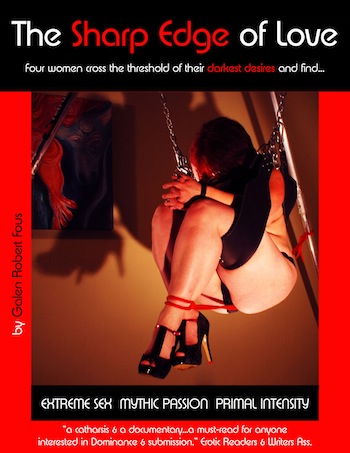 “… like eavesdropping on a private conversation… these intimate confessions made me blush and turned me on.” — Betty Dodson, Ph.D, Author of Sex for One

“…I became literally obsessed, unable to keep my hands off the book- or myself!” — Mindcaviar.com, Cassandra Snow

“…a taboo-breakers stroke dream…like A Man and His Maid all over again, only without the British Victoriana.” — Susie Bright, Playboy columist; editor-Best American Erotica

“I found the accurate portrayal of the D/s world, the blur of reality and fantasy, most compelling .” — Deborah Hyde, Pursed Lips, Novelist, journalist and editor

“To be unaffected by The Sharp Edge of Love is not to be human… an enlightening experience!” — Custom Erotica Source, Sage Vivant

“If you crave a sexy, true-life account of a Dominant man and his loves, you’ll find plenty of satisfaction…” — JZ Sharpe, ENE

And due to the significant differences in the two books, the contrast to the two may be welcomed.

Unlike 50 Shades’ Mr Grey, the protagonist Galen, in The Sharp Edge of Love,  has already made the mature transformation from fear to freedom, and would like to give you a taste of the ecstatic riches, that come with taking the risk to embrace your soul’s deepest, darkest wishes. He wants to stir you to the place where you decide that it is good and rewarding to listen and open to your own fantasies.”

Getting honest about our kinkiest desires, is a very hot topic for millions of people. Via the anonymity and safety of the Internet, and an expansive range of edgy erotica, women in particular are beginning to explore the truth of their sexuality. People in droves are risking the judgement, shame and recriminations of a hypocritical culture, to express their true sexual identity.

My goal for the book is that it serve as a gateway, for those who might need a nudge to cross through to the honest, conscious and healthy expression of their sexuality. I want people to know that there is nobility in seeking their truth, sexual and otherwise

To order your copy of The Sharp Edge of Love in digital version for $9.99,  ORDER HERE

A fascinating dimension of the book is Galen’s turbulent entry into the lifestyle as a Dom. After his vengeful, conservative ex-wife slanderously “outs” him, he becomes a persona non grata to family, friends and business associates. The divorce court system, horrified at his lifestyle choice, brutalizes the law, and his children, to punish the deviant, corrupt soul they cast him as . This back-story of his own struggle to survive this inquisition level assault, on his rights as a man, father, business partner and human, is a compelling counterpoint to his decadent, yet authentic pursuit of his own sexual truth.

This is a true account of Arlana – talented artist, deft intellectual, soulful ally, international beauty, fetish model, and a submissive of the highest rank.  She could, as well,  be a cruel Domme bitch to lesser subs, when allowed. We tussled together like two excited Panther cubs, clashed and harmonized intellectually, crafted prose as romantic, lyrical and poignant as a John Fowles novel. We developed a sacred trust that allowed us to reveal our deepest wounds, and found them soothed in the ointment of tenderness. This is as smooth a blend of epic romance and decadent erotica as you’ll find.

With Lana, what started as a trickle, soon became a torrent. We became a tropical storm of raging perversity and desire, that blew out as fast as it blew in. But the fury and frenzy of our briefly explored lust, love and passion was an exhilarating trial run in my quest for my soulmate/slavegirl.

Kate was a 30 year-old attorney, in the law firm that represented me in my divorce. My ex, in a campaign to annihilate me emotionally, spiritually and financially during our divorce, had slandered me far and wide in my community. She slew about “evidence” regarding my D/s inclinations,  that was intended to prove beyond a doubt that I was a dangerous, violent, and abusive sex addict beyond help. This “evidence”, in her own twisted mind, cast me as a disgusting, vile,  perverted psychopath, and an unfit parent. Kate came across the “evidence” while helping out my attorney, preparing for depositions. She contacted me privately, and asked if I could meet her for a drink.  Suddenly, the “evidence” turned in my favor! Kate became my submissive, and turned into one of the nastiest, baddest little girls I have ever experienced, as well as a very close friend and intimate ally…at a time when I had no others!

These women all displayed a luscious depth, nobility, courage, intelligence and the edgiest depravity you could imagine. Their stories are true accounts of mythic romance, primal passion and extreme sex. The reader on the edge of exploring their kinky desires, will find this book illuminating and encouraging. For the rest… The Sharp Edge of Love is a “taboo-breaker’s stroke dream!”

To order your copy of The Sharp Edge of Love in digital version for $9.99,  ORDER HERE

About the Author: Galen